“Life is just one damn thing after another.” — Anonymous

In my research on workism and post-workism, I discovered another concept: “total work.”

Total work seems to be the epitome of workism. This is also timely given all the news coverage of Jack Ma, billionaire co-founder of Alibaba, endorsing “996” for Chinese workers—working 9am to 9pm, six days a week. A 72-hour workweek. The New York Times says, “996 is China’s version of hustle culture.” Ma followed up his initial comments with:

In the spirit of truth and thinking, we are going to ask some big questions in this post.

I came across the concept of total work through Andrew Taggart—and, oh man, has he opened my eyes and expanded my mind to an entirely new level of thinking about work: the history and evolution of work, the meaning of work (and life for that matter), and where work should be headed in the future. Total work is the most profound concept I’ve come across lately; it’s a good example of this quote for me:

Since discovering Taggart, I’ve devoured his writing on his blog, LinkedIn, and Quartz. This post covers the highlights of everything I’ve read and learned so far.

Who is Andrew Taggart?

Andrew Taggart describes himself as a “a practical philosopher, Zen Buddhist, and entrepreneur.”

Possibly the best way to get introduced to him is by watching his TEDx Talk How Work Took Over The World:

In his talk, Taggart says:

If you skipped the video and are wondering who Nathaniel is, he is a 5-year old boy who wrote this in his kindergarten class:

Is this “cute” like one of the comments suggests? Or, are there incredibly deep questions that we should be asking humanity at this point in our collective journey?

What is work? What is the meaning of work? Are humans born to work?

Andrew Taggart has investigated and philosophized about these very questions.

What is Total Work?

“Total work” was coined by German philosopher Josef Pieper in his book Leisure: The Basis of Culture (1948). Pieper started asking the tough questions—in his own words:

Andrew Taggart is picking up and building upon Pieper’s work, and defines total work as: 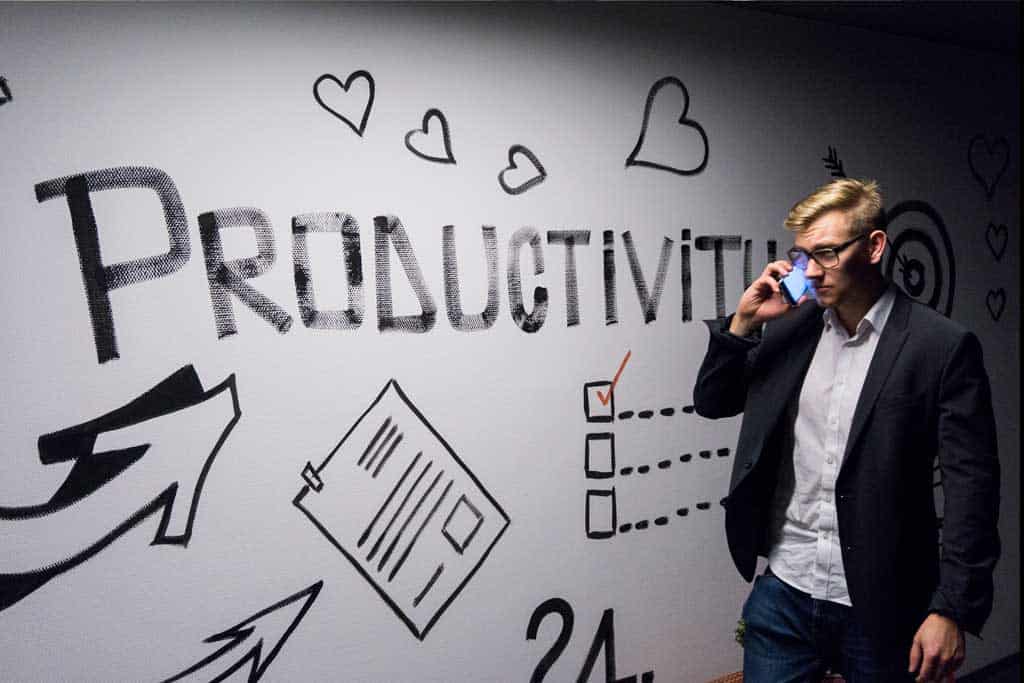 “How can society’s purported ‘winners’ actually be ‘losers’? The young man in private equity working 80-120 hours a week. The young woman, a new executive at a successful Silicon Valley startup, working at least 80.” — Andrew Taggart6

“TW’s life is a burden waiting to burn out in despair.” — Andrew Taggart

“The taskification of the world is correlated with the burden character of total work.” — Andrew Taggart

“Burden” is a recurring theme you’ll notice throughout. Much of this burden is self-inflicted and of our own making. Life shouldn’t be an experience that we just “get through.” There are ways to design a lighter life.

Some Quick Notes on “Usefulness”:

Emphasis underlined by me.

I’m not sure I would have ever guessed that the simple word “useful” would come up in my reading so often recently. In fact, it’s the primary driver behind Elon Musk—who also happens to subscribe to workism and total work 80+ hour workweeks:

But, is usefulness really the goal? Let’s go back to the 1930 essay Economic Possibilities for our Grandchildren by John Maynard Keynes:

How did we get to Total Work in the First Place?

If you’re able to boil down the history and evolution of work into a few paragraphs, here’s a solid attempt by Taggart (borrowing from the philosopher Edward Craig):

We’ll come back to the “Image of God” Doctrine and “Agent Theory” in a minute. Ultimately, Taggart comes to this conclusion and explanation for how we got here:

This gave me an aha moment: all voids always have been—and always will be—filled. It’s like the law of conservation of mass (matter is neither created nor destroyed). From voids of meaning to voids of time, they all get filled with something. That something changes throughout history. Time never changes (we still get 24 hours per day), but how we spend time has changed. We are still “busy,” but the busyness is different today. We still look for meaning, but how we define meaning has evolved.

The Meaning of Work & How to Evolve Beyond Total Work

“All of humanity’s problems stem from man’s inability to sit quietly in a room alone.” — Blaise Pascal

I’ve lived the total work life. I suppose it was by my own unconscious doing by opting into a career of digital marketing. The marketing and advertising world is one thing, but the digital marketing world is the exact description of “what it looks and feels like to be a Total Worker” that was outlined above. It would take the better part of a decade for me to “wake up”—and it took a massive, life-changing existential crisis for me to do so. Needless to say, I’m wholeheartedly and wholemindedly interested in entertaining the possible ways to evolve beyond total work. I’ve experienced the attrition of my soul:

“Pancake people”…that deserves an entire post on its own. For a later date.

Let’s start by going big—asking the big questions. This is something the majority of people actively avoid by choosing the escapism of busyness. Work has become the ultimate escapism from life. Taggart says:

We are going to ask those big questions: What is the meaning of work? Are humans born to work? Should life revolve around work? Should “Humans” simply be renamed “Workers”?

To do so, we need to start with meaning.

Let’s revisit the “Image of God” doctrine and “Agent Theory”—which of these do you believe? 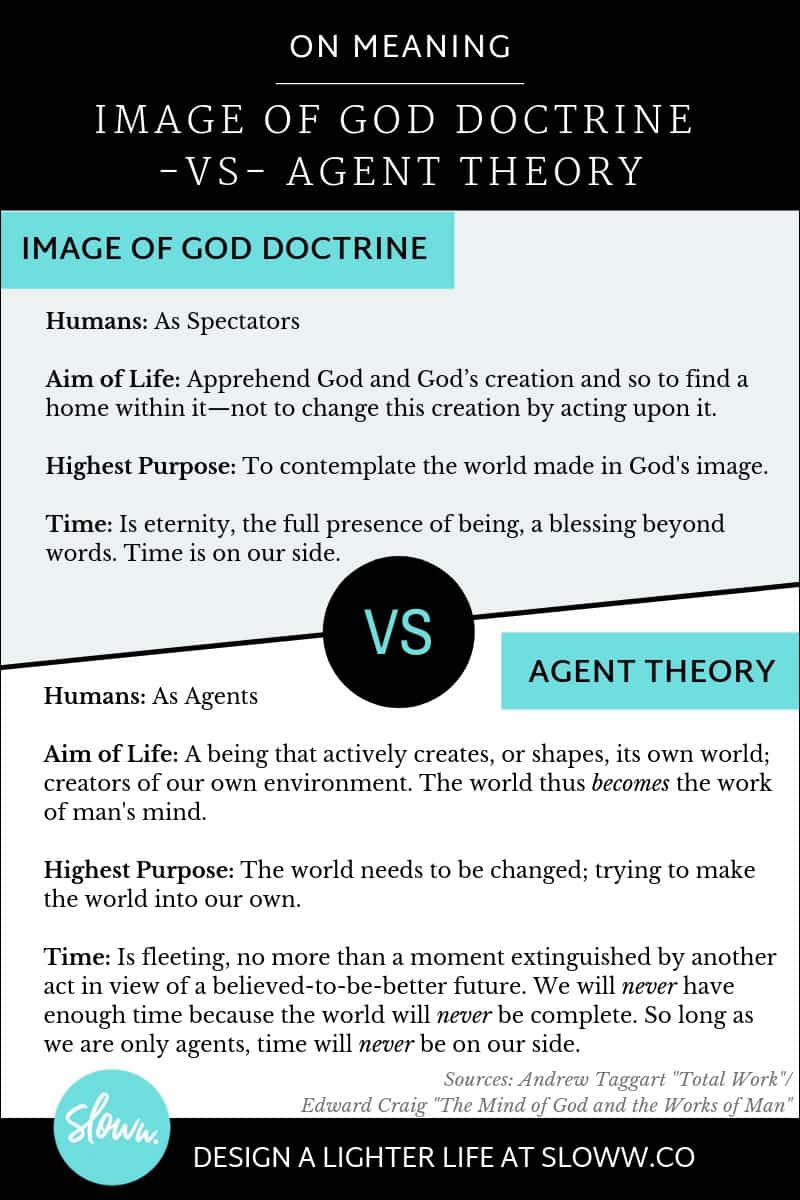 There was a time as recently as a few years ago where I probably would have said I believe in “Agent Theory.” My work busyness completely blinded my life. But, that time has passed. Maybe I had to fail or be a figurative “loser” with workism, total work, and “Agent Theory” before I saw the light. Reminds me of this from Eckhart Tolle:

What you believe drives your behavior, and your behavior determines who you become. This is why we must start with beliefs. You can derive your value of work based on which way you choose to find meaning in life.

This resonates with me. It reminds me of this quote:

Challenging the concept of work isn’t new. Bertrand Russell, author of the essay In Praise of Idleness (1932), challenged the value and virtuousness of work during his day:

Here are a couple of the key insights from Russell:

Then, sixteen years after Bertrand Russell’s In Praise of Idleness, the world was graced with Josef Pieper’s Leisure: The Basis of Culture. Let’s see if there’s anything else we can glean from Pieper’s words: 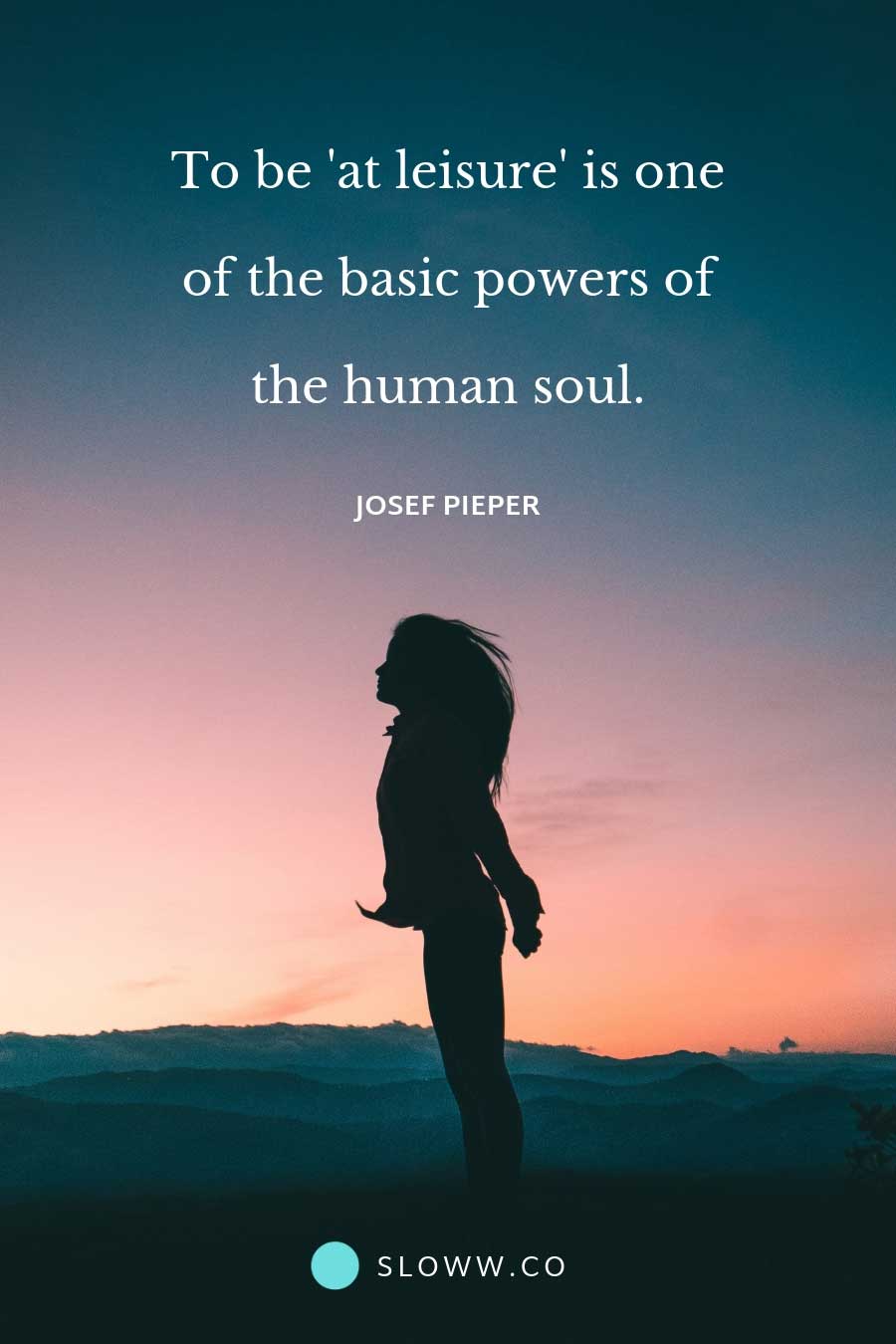 Maria Popova agrees with this sentiment about leisure:

John Maynard Keynes believes “how to occupy the leisure” is mankind’s ultimate challenge:

Here are some practical recommendations Taggart offers for all of us to consider to evolve beyond total work:

I’ll leave you to ponder Andrew Taggart’s vision of utopia:

What do you believe?

For a more recent (but longer) video of Andrew Taggart, check out The Brief Story of How Work Took over the World and Made Us Who We Think We Are: