The new ikigai eBook is live! It covers an updated version of this post and everything I’ve learned about ikigai over the last five years — Ikigai 2.0: A Step-by-Step Guidebook to Finding Life Purpose & Making Money Meaningfully (+ Bonus Workbook)

This is the first post in an ikigai series. Links to the remainder of the series are listed at the bottom of this post.

The True Meaning of Ikigai: Definitions, Diagrams & Myths about the Japanese Life Purpose

But, what is ikigai really? Like most things, there’s a lot of misinformation floating around on the internet. My hope with this post is to give you the truth about ikigai. 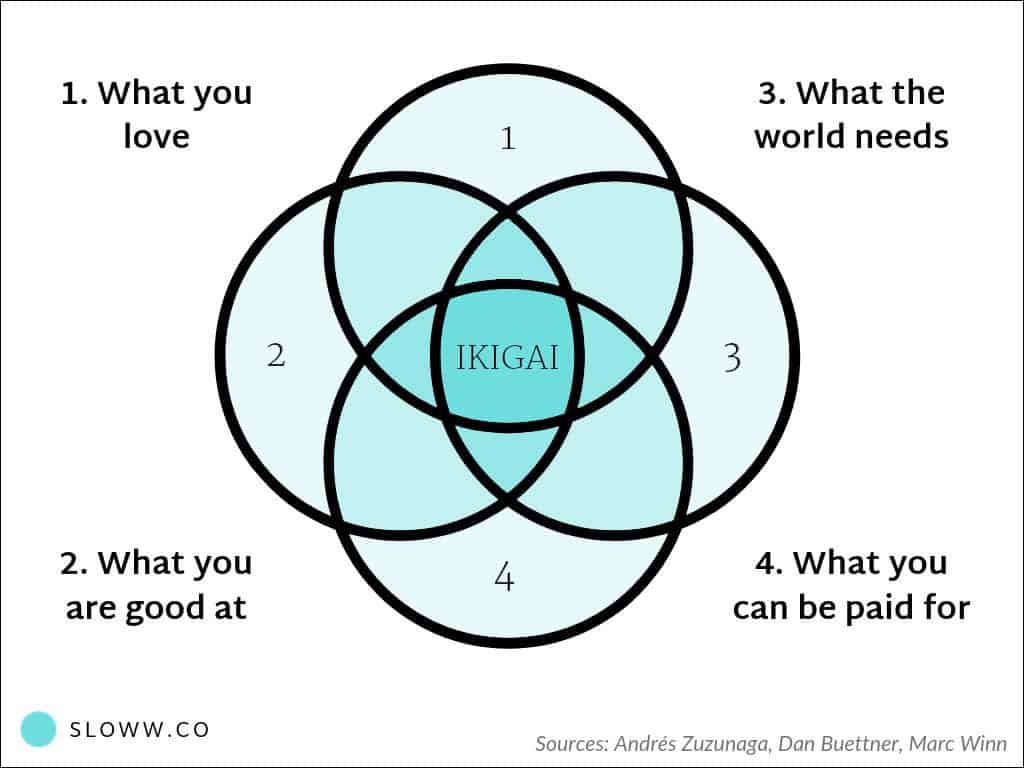 The Origin of Ikigai & Rise in Popularity

The earliest online mention I can find of ikigai is from 1996—Gordon Mathews published a book titled What Makes Life Worth Living? How Japanese and Americans Make Sense of Their Worlds (you can access a sample of this book in footnote 1). Mathews first came across the word ikigai in the 1980s while living in Japan and believes:

In 1999, a paper was published in Age and Ageing titled “‘Ikigai’ in older Japanese people”². This short article has some great insights that I’ve included in this post—it provides a unique perspective on ikigai before the turn of the century, social media proliferation, and the Westernization of the term.

We’ll dive into the various ikigai definitions and diagrams, but what makes this concept so popular?

The Definition of Ikigai

There’s no direct translation of ikigai into English, but the most legitimate definitions I’ve found are the following (emphasis added in bold):

This is pretty close to how Wikipedia describes it as well:

After rereading the bolded areas above, what if we were to view ikigai like this:

Aha Moment: Your “reason for being” gives you a “reason to live.”

As far as descriptions go, here are a couple I resonate with:

“Ikigai is what, day after day and year after year, each of us most essentially lives for.”5

The Truth about the Ikigai Diagram 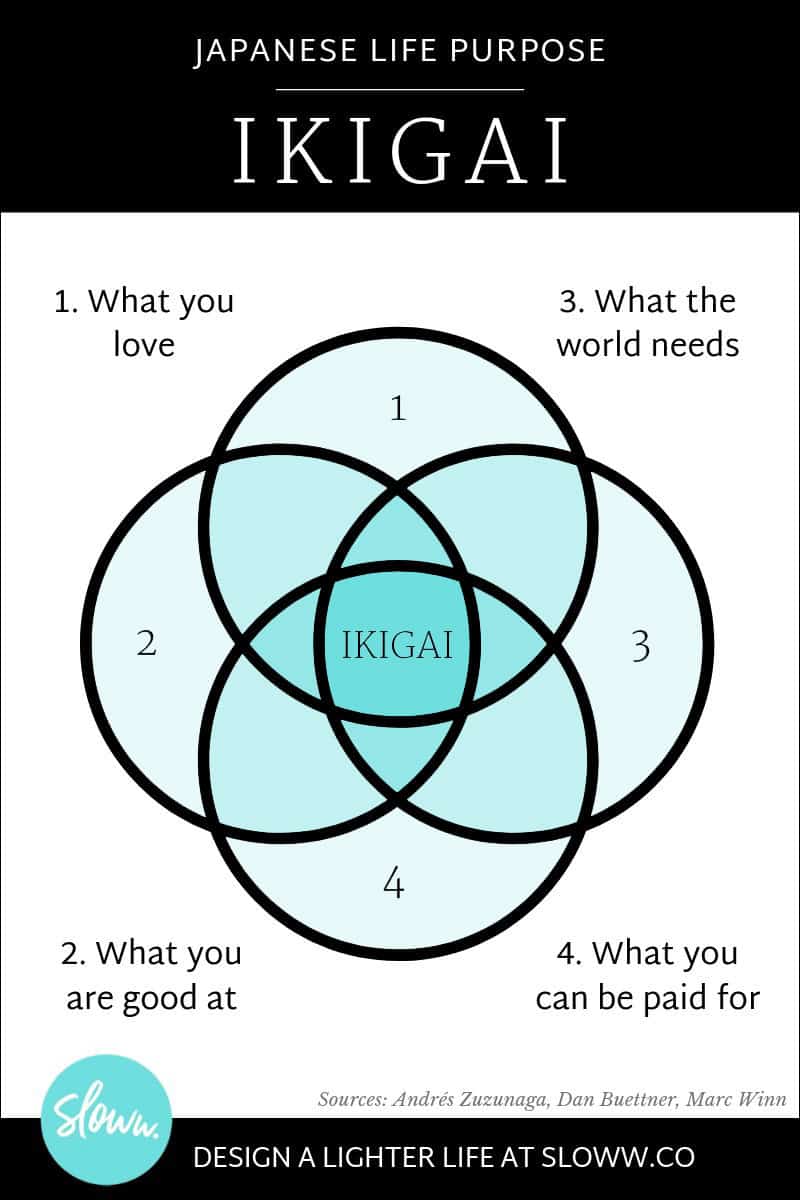 Most people associate ikigai with the four-circle diagram created by Marc Winn in 20146:

But, three years after creating the diagram, Marc revealed the truth:

Changed one word on a diagram? What is the venn diagram on purpose that he mentioned? Winn confirmed he sourced it from Andrés Zuzunaga who originally created the graphic in Spanish two years earlier. Winn said:

So, is Zuzunaga the original? Well, that’s tricky too.

All of this is eerily similar to the Hedgehog Concept created by Jim Collins in his book Good to Great which was published in 2001:

Since publishing Good to Great, Jim Collins has updated the Hedgehog Concept—which was originally intended for businesses—to apply to people.

I compared the Hedgehog Concept vs Ikigai. Here’s what that looks like: 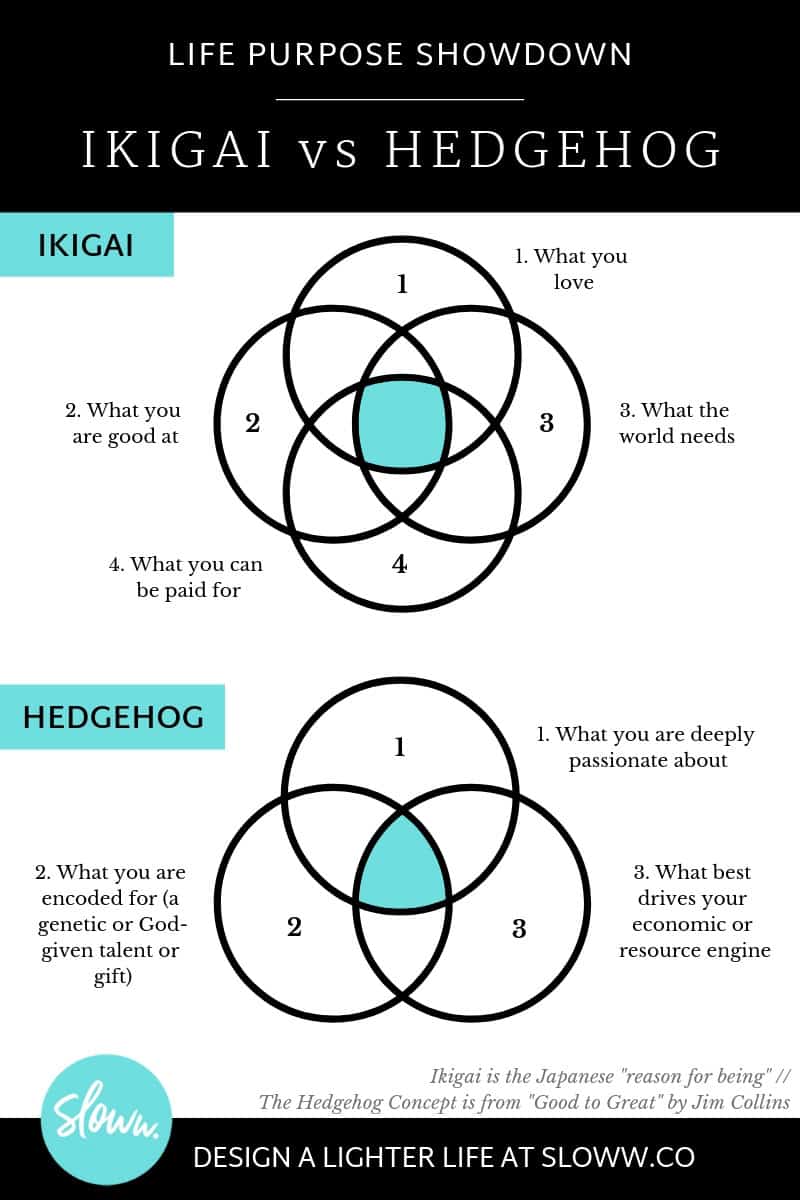 Given the amount of research Jim Collins puts into his work, I wouldn’t be surprised if his version is the most “original” of all. At the same time, his work is the result of his own curating, synthesizing, and insight gathering—all of which have influenced his Hedgehog Concept. So, I think we can just conclude that everything is a remix of something else.

Ikigai Myths: Addressing 3 Big Misperceptions about Ikigai in the West

Ikigai isn’t necessarily about your work (you weren’t born to work):

There is evidence in the fact that many Japanese people keep pursuing their ikigai until the end of their lives:

Other than work, ikigai can be family, a dream, or simply the spiritual feeling that life is worth living:

This is a big difference compared to other models for life purpose. For instance, Simon Sinek and his co-authors of Find Your Why say:

I disagree with them. Instead, I agree with Oprah in her book The Path Made Clear when she says:

Naturally, if your ikigai doesn’t have to be work-related, then money can (and should) be removed from the diagram. Along with the perception that ikigai relates to work, the circle for “that which you can be paid for” gets a lot of criticism for being a misinterpretation by Westerners:

Some, like Tim Tamashiro, believe this could be reframed as “what you can be rewarded for.”

2. Ikigai doesn’t have to be viewed as an overwhelming, all-or-nothing life purpose

There’s no shortage of people out there who want to convince you that you have one life purpose and one life purpose only. This can be incredibly overwhelming for people as they try to find their one and only purpose.

What I’ve learned is that:

It’s about the process vs the final aim:

3. You can have more than one ikigai in your life

One thing to keep in mind is that you can edit your life purpose at any age. It’s natural that your purpose will evolve over time:

Ikigai Tips to Get You Started

I’ve also read the top-reviewed book currently available on ikigai: Ikigai: The Japanese Secret to a Long and Happy Life by Héctor García and Francesc Miralles.

After interviewing one hundred centenarians and supercentenarians in Ogimi, Okinawa to try to understand their life philosophy and longevity secrets, the authors developed their ten rules of ikigai: 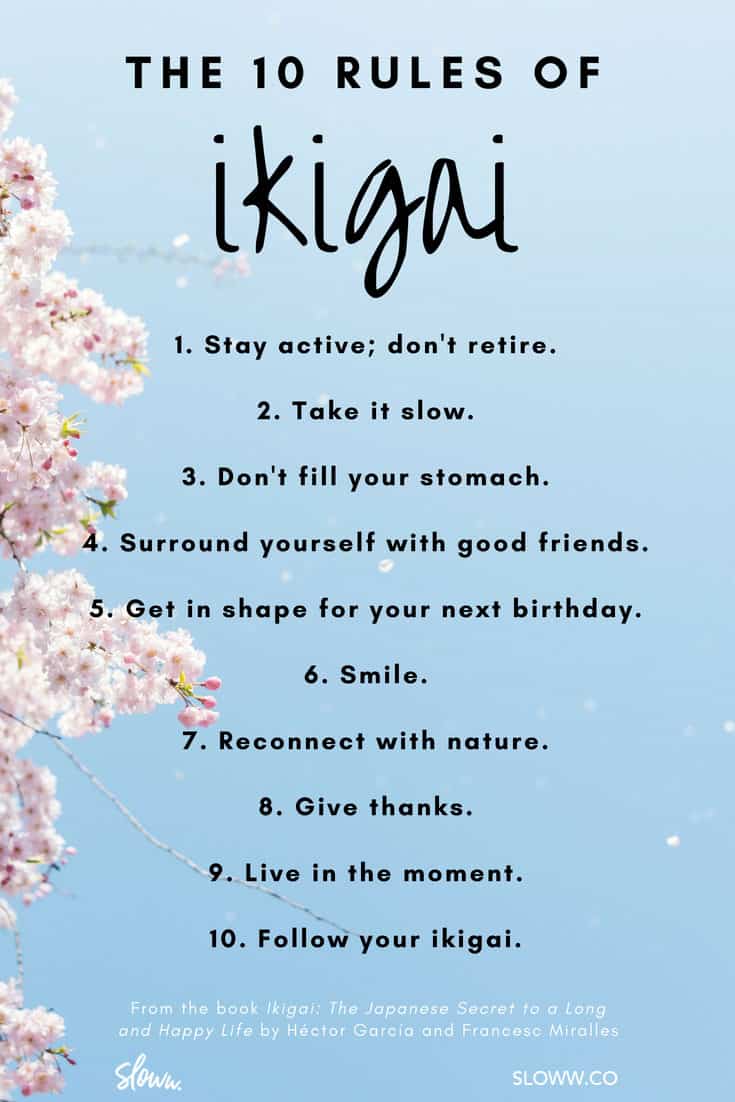 Bonus: Of all the ikigai TED Talks and YouTube videos, here’s one that is simple and worth watching:

Have you found your ikigai? If so, please let me know what it is in the comments.