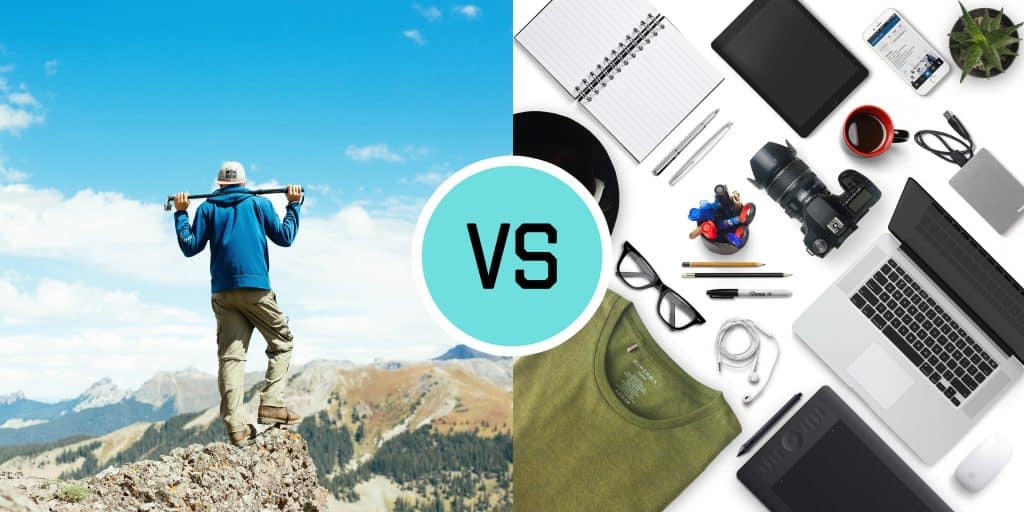 This has been top of mind for a few years now — the experiences vs things showdown.

We’ve all seen the headlines — spending is shifting from things to experiences. FOMO is the new “keeping up with the Joneses.” Blame Millennials for your favorite thing-based business going out of business.

There are research studies that try to resolve this never-ending debate. I’ve pulled the abstracts from two of the more recent studies below — the first except is from 2014 and the second from 2017:

That conclusion probably isn’t too surprising. It falls in line with the media headlines you’ve likely seen. However, this next study rocks the “experiences = happiness” boat a little bit.

In the last decade, a number of studies using experimental designs have stated that spending money on experiences rather than on material goods tends to make people happier. In this research we used a novel survey approach to examine the relationships between experiential and material expenditures and life satisfaction. In two studies based on cross-sectional survey data from nationally representative samples in Hungary, we estimated linear and non-linear models. We found no significant evidence supporting the greater return received when buying experiences. Even in the non-linear models the difference between the marginal utilities was not statistically significant at any expenditure rate, although the marginal utility of experiential purchases appeared to be linear, whereas the marginal utility of material purchases was rather decreasing. Nevertheless, our results suggest that a reallocation of an average person’s expenditures (spending more on experiences and less on material goods) might be associated with a slightly higher well-being. — The association between experiential and material expenditures and subjective well-being: New evidence from Hungarian survey data (Tamás Hajdu, Gábor Hajdu, 2017)

Aside from that most recent research study in 2017, I don’t think I’ve seen anything that says spending on things offers equal or greater happiness than spending on experiences.

I’ve always found this a bit odd for a few reasons. Hear me out…

I think there are plenty of material things that can add happiness or utility to your life. If you practice some form of minimalism, you still own some things. Even the people who post articles like “The 15 (or 51 or 288) Things I Own” still own 15 or 51 or 288 things. Maybe you live by the philosophy of “less but better” from Essentialism. That same philosophy can apply to physical goods — buying durable, long-lasting things that go on the journey of life with you. And, because you are a minimalist, you likely have less things in general and have intentionally hand-picked the few things you do own. The perceived and tangible value of those few things can be very high. Happiness!

There are also things that may be both a material good and experience in one:

If I buy a book for example, I buy it to go on some intellectual experience. Take me away with a good story or some new ideas! That’s an experience, right? Or is it stuff, because you wind up with that physical book at the end? Does the distinction really matter? — The Simple Dollar

Remember that Experience? Not Really…

What makes experiences so great, anyway? Experience advocates would likely mention memories of the experience. However, we can’t even trust ourselves. Apparently, every time you recall a memory, you change it:

Our memories can change because each time we revisit them they become vulnerable. When we first lay down a memory, it takes the brain a little while to solidly store the information—a process called consolidation. And every time we subsequently recall that memory, it has to go through a new storage process—another slight delay for another consolidation. During that window, new information can interfere with the old information and alter the memory. Phelps says it is like playing the school game of telephone, where one student tells a short story to a second student, then that person retells it to a third, who tells it to a fourth, and so on. By the end of the chain the story is usually quite different from how it began.

Maybe it’s just me, but I’ve got a pretty questionable memory to begin with — adding the telephone game only makes it worse. I usually can’t even remember a basic experience like a dinner out. I can’t remember if I’ve ever even been to certain restaurants much less what I ordered, if it was good, what the service was like, etc. This same thing applies to travel experiences for me once enough time passes.

Another interesting thought — does recalling experiences trap you in the past?

My dad said something interesting recently: “The memory you have of an experience keeps you in the past instead of living in the present.”

A Thought Experiment for You

I’ve seen a thought experiment defined as “an experiment carried out only in the imagination” and “a device of the imagination used to investigate the nature of things.” Here’s how the Stanford Encyclopedia of Philosophy describes it:

The primary philosophical challenge of thought experiments is simple: How can we learn about reality (if we can at all), just by thinking? More precisely, are there thought experiments that enable us to acquire new knowledge about the intended realm of investigation without new empirical data?

I do believe there’s a common denominator to both: spending money. Does spending on experiences vs things make you happier? Or, put differently, is spending on one more dangerous than the other? Aren’t they both forms of lifestyle inflation?

What about the other element of spending your only non-renewable resource: spending time?

The answer to this thought experiment is, of course, up to each individual. For me, it simply comes down to balance. I try to avoid escapism at all costs these days and confront life face to face. At the same time, I’m happy buying some durable, long-lasting things and engaging in some (hopefully memorable) life experiences. It’s just the balancing act between them and in moderation.

Last year, I spent $0 on clothing for 6 months. But, the money I saved on things didn’t transfer to experiences. Given that there’s a legitimate question of whether or not Millennials will ever retire, I felt it was more important to begin applying some of the principles of FIRE (Financial Independence Retire Early).

Pro Tip: Ask yourself “why” you are spending before every purchase. Actually, ask “why” 5 times. If this makes you identify the spending as a form of escapism, reconsider the purchase.

What is the vision you have for your life? Does the thing or experience align with that vision or add to the journey you’re on? Ask, “then what?”

Nobody in history bought anything for any reason other than how it made them feel. (Source)

This is a big question. Big enough that I thought it warranted a thought experiment. I don’t think the answer can really be answered in research studies. I’d love to know if you have a perspective on experiences vs things. Please share any thoughts you have in the comments.