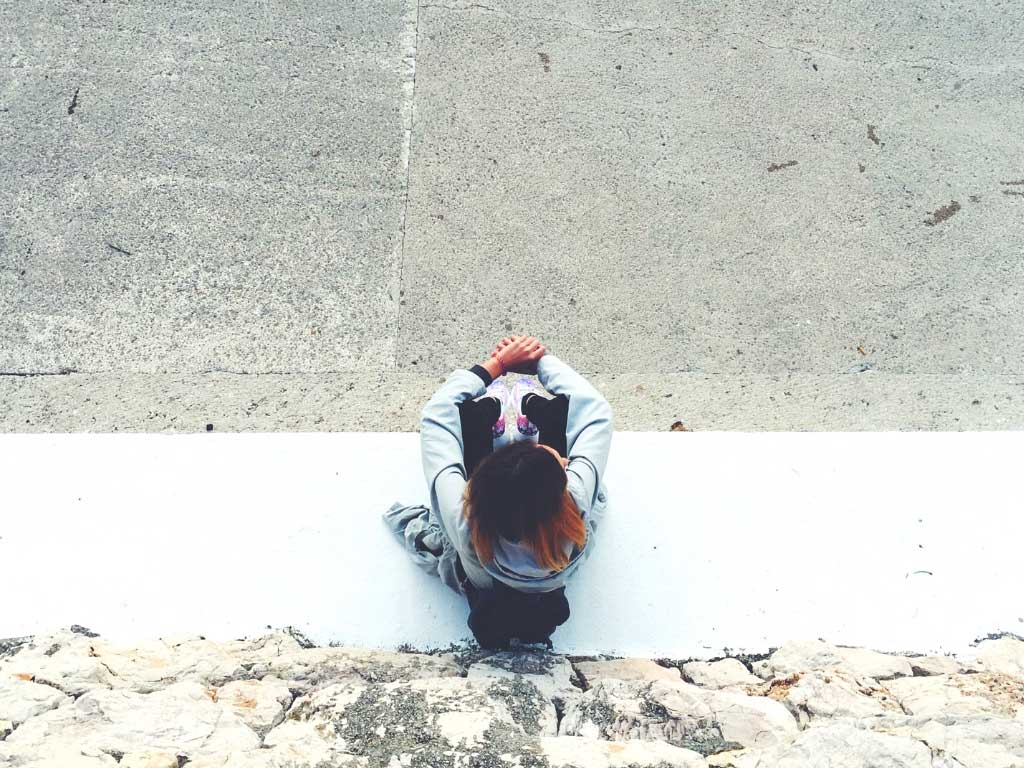 I’ve seen “simple living, high thinking” a few times lately, so I took that as a sign to do some digging about it. It’s a bonus that I also find the phrase intriguing and subject to personal interpretation.

I figured there would be some original quotes including those words along with an origin story. To my surprise, I can’t seem to find either (at least an origin story).

If you search it, you’ll mostly find results dominated by Indian spiritual leaders and philosophers. You may even find a “simple living, high thinking” quote attributed to Mahatma Gandhi. If you aren’t familiar with Gandhi’s story, it’s an amazing one—he didn’t find his purpose until an incident when he was 23 years old. Yet today, he is the personification of simple living—literally, he’s the featured image for the “Simple Living” page on Wikipedia.

Paramahansa Yogananda, an Indian yogi and guru, was also alive during Gandhi’s same time period. Perhaps the phrase originated from one of the following:

Plain living and high thinking should be your goal. Learn to carry all the conditions of happiness within yourself by meditating and attuning your consciousness to the ever-existing, ever-conscious, ever-new Joy, which is God. Your happiness should never be subject to any outside influence. Whatever your environment is, don’t allow your inner peace be touched by it. — Paramahansa Yogananda

This day marks the birth of a new era. My spoken words are registered in the ether, in the Spirit of God, and they shall move the West! Self-Realization has come to unite all religions! We must go on — not only those who are here, but thousands of youths must go North, South, East and West to cover the earth with little colonies, demonstrating that simplicity of living plus high thinking lead to the greatest happiness! — Paramahansa Yogananda via Swami Kriyananda 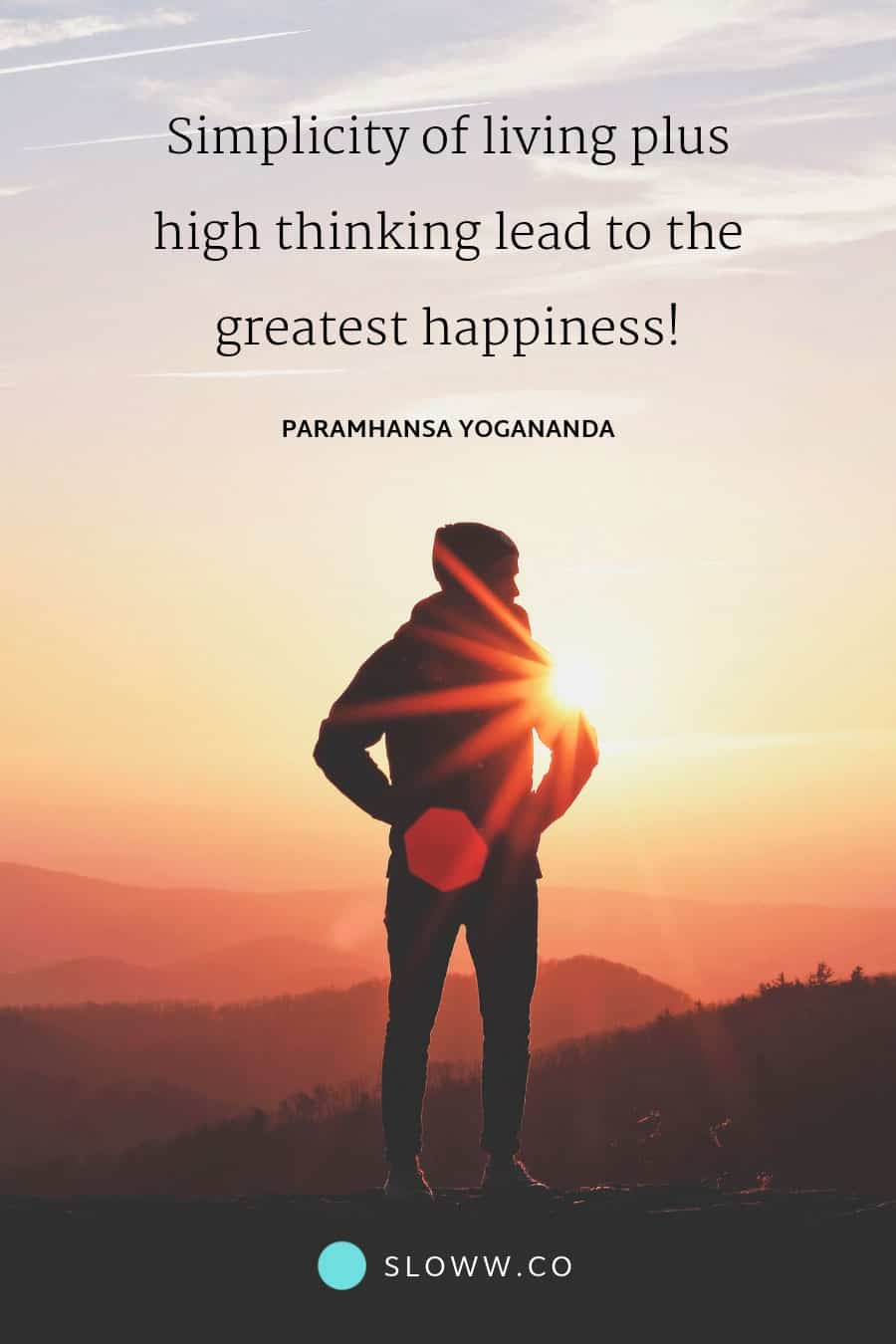 What is Simple Living, High Thinking?

“Simple living” is fairly straightforward—at least in comparison to “high thinking.” We’ll come back to simple living in a bit.

I asked a couple people to define “high thinking,” and this was the response:

Personally, when I first heard this phrase, I associated “high thinking” with “intellectual thinking” or “deep thinking.”

Thinking is the hardest work there is, which is the probable reason why so few engage in it. — Henry Ford

And, high/intellectual/deep thinking? Well, that should be even harder:

If you believe high thinking is only for certain experts, consider this:

The world’s greatest thinkers have often been amateurs; for high thinking is the outcome of fine and independent living, and for that a professional chair offers no special opportunities. — Havelock Ellis

There needs to be a shift in focus—from the outer world to the inner world, turning inward instead of focusing outward.

A shift in focus brings about a shift in time—from spending time on the external to the internal. Some refer to this as a shift from the body (physical world) to the mind (non-physical world).

These shifts in focus and time result in a reduction of non-essentials—both physical things in your life and distractions of your time:

In order to seek one’s own direction, one must simplify the mechanics of ordinary, everyday life. — Plato

Which comes first: the High Thinking or the Simple Living?

I think this is a chicken and egg situation here. This is a pretty good video that proposes that the entire phrase should actually be reversed: High Thinking, Simple Living.

In my personal case, the high thinking came first, followed by the simple living, and then more high thinking. I’m not sure I would have come to simple living before doing some critical thinking. This is likely a sign of the times—it’s countercultural today to live simply in the modern Western world.

In actual life, it requires the greatest art to be simple. ― Carl Jung

The more you know, the less you need. — Yvon Chouinard

What we achieve inwardly will change outer reality. — Otto Rank

However, the thinking mind is both a gift and a burden of humanity:

A mature first­-year student at twenty­-five, I saw myself as an intellectual in the making, and I was convinced that all the answers to the dilemmas of human existence could be found through the intellect, that is to say, by thinking. I didn’t realize yet that thinking without awareness is the main dilemma of human existence. — Eckhart Tolle

Intellectual thinking alone will only get you so far. No one will ever know everything:

No one knows everything. No one knows nothing. Everyone has a piece of the puzzle. — Lama Surya Das

What is above intellectual thinking? I’d say it’s spirituality. But, spirituality is a broad subject. Let’s try to break it down a bit.

Perhaps high thinking means thinking beyond yourself or above yourself (or your self). Observing or witnessing the thinking mind. Is it synonymous with consciousness? Overcoming ego? Maybe it’s literally beyond oneself completely—focusing on others vs yourself.

What happens when you rise above thinking?

Peace is in the emptiness. Emptiness is in the fast of the mind. — Lao Tzu

All you need to do is be aware of your thoughts and emotions – as they happen. This is not really a ‘doing,’ but an alert ‘seeing.’ In that sense, it is true that there is nothing you can do to become free of the ego. When that shift happens, which is the shift from thinking to awareness, an intelligence far greater than the ego’s cleverness begins to operate in your life. — Eckhart Tolle

Transcendence refers to the very highest and most inclusive or holistic levels of human consciousness, behaving and relating, as ends rather than means, to oneself, to significant others, to human beings in general, to other species, to nature, and to the cosmos. — Abraham Maslow, The Farther Reaches of Human Nature

The self only finds its actualization in giving itself to some higher goal outside oneself, in altruism and spirituality. — Abraham Maslow (Note: I can’t find an exact attribution of this quote to Maslow, so it may be paraphrased)

I truly believe this is the next phase of humanity’s evolution:

Humanity can still prosper for 150,000 years…but this depends on choosing a voluntary simplicity…growing qualitatively, not quantitatively. — Matthieu Ricard

If this piqued your interest, check out these two posts: