If I had to pick one person as my biggest living inspiration for combinatorial creativity, it would be Maria Popova—founder of the popular blog Brain Pickings.

She has read and written thousands of pieces of content over the last decade. I attempted to distill everything I’ve learned from her into my all-time top-three learnings from Maria Popova. One of those three key learnings was: focus on combinatorial creativity in work and life.

Combinatorial Creativity: The Art of “New” Ideas & Why Everything is a Remix

What is Combinatorial Creativity?

Maria Popova is also one of the greatest synthesizers and curators of our time (even though she isn’t a fan of the word curation itself). She’s an advocate for:

Popova has been described (by herself and others) as:

At one point in my research I even saw the hashtag #curativity mentioned. Here’s how Popova describes the curatorial process and combinatorial creativity in her own words (emphasis added in bold).

“In an age of information overload, information discovery — the service of bringing to the public’s attention that which is interesting, meaningful, important, and otherwise worthy of our time and thought — is a form of creative and intellectual labor, and one of increasing importance and urgency.” — Maria Popova

“I believe creativity itself is the original open-source code.” — Maria Popova

“Here’s to filling our mental petri dishes with the best, most diverse and cross-disciplinary ideas possible, so we can be our best combinatorial mashup-selves.” — Maria Popova 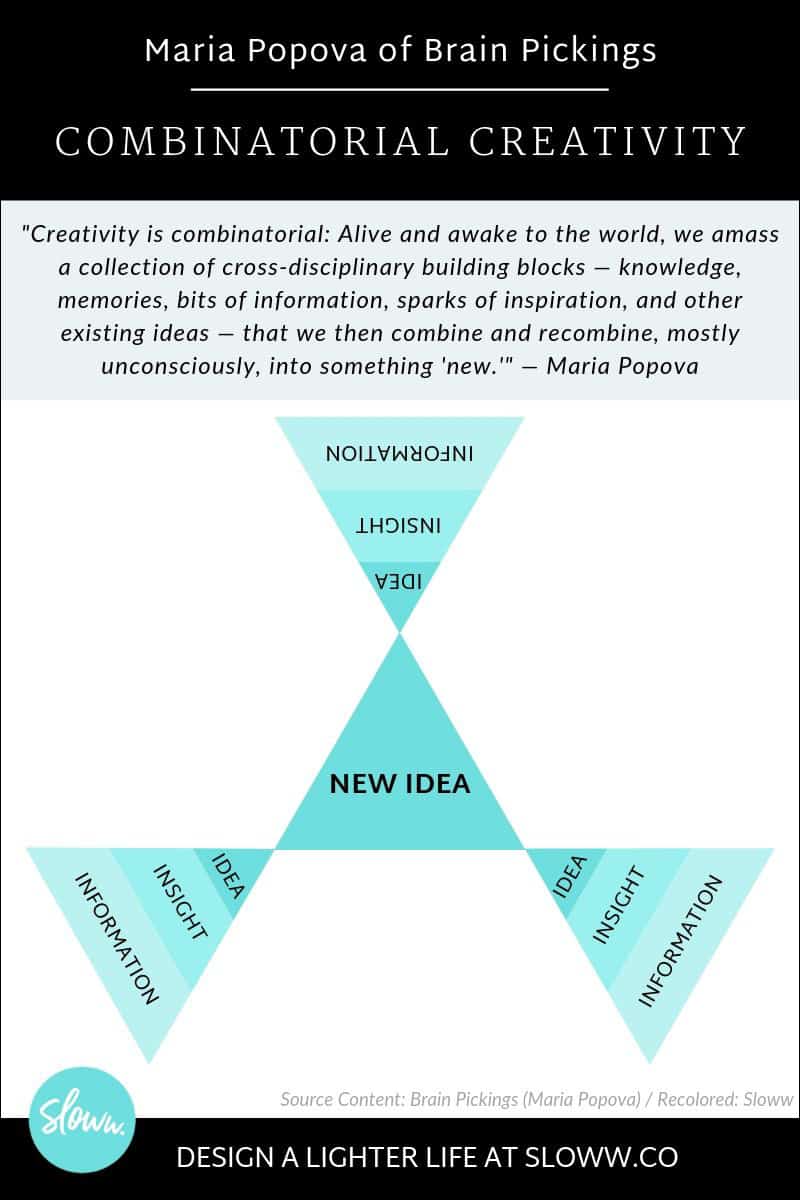 Maria Popova isn’t the only one acknowledging the fact that all creativity builds on what came before it. There are quite a few modern combinatorial creators to take inspiration from:

Everything is a Remix by Kirby Ferguson:

Combinatorial Creators of the Past

Since we’ve established that nothing is “new,” what can we learn from the great combinatorial creators of the past? First, we must understand that eventually everything connects:

We need to learn how to see:

Seeing must lead to thinking:

Thinking must lead to productive thought:

Ready to start? Find where the last person left off:

Some refer to this as “standing on the shoulders of giants”:

I’ll leave you with this inspirational letter Mark Twain penned to Helen Keller after she was accused of plagiarism: