The One Quote Burning in my Brain from the Minimalism Documentary

I watched Minimalism: A Documentary about the Important Things (Amazon) around the time it was first released in 2016—probably not too long after my existential crisis in late 2015.

There was one part of the film in particular that stuck with me even though I only watched it once. I’ve wanted to write this post for years, but I could never find the exact quote anywhere online. This week, I finally revisited the film to find it.

What’s the one quote that’s been burning in my brain?

Clyde Dinkins, a Las Vegas resident, challenges Joshua Fields Millburn & Ryan Nicodemus (aka “The Minimalists”) during a Q&A session at the end of one of their events:

You’re dedicated, you’re creative, you’re innovative. You have a sincere desire for mankind—the very people who the wolves of Wall Street fear. And to me, you’re removing yourself from the war. If you’re really talking about minimalism, the ultimate minimalist is a hermit, a recluse, or a monk—and to me, that’s not gonna change the world. You know what I’m saying? You’re the only threat to that system…We’re trying to destroy those wolves of Wall Street. I’m serious. — Clyde Dinkins

This hit me hard a few years ago.

It was my exact thinking at a time when I was struggling to reconcile my work (marketer—selling people more stuff) with my life (downshifting, voluntary simplicity, minimalism—all in the spirit of less). 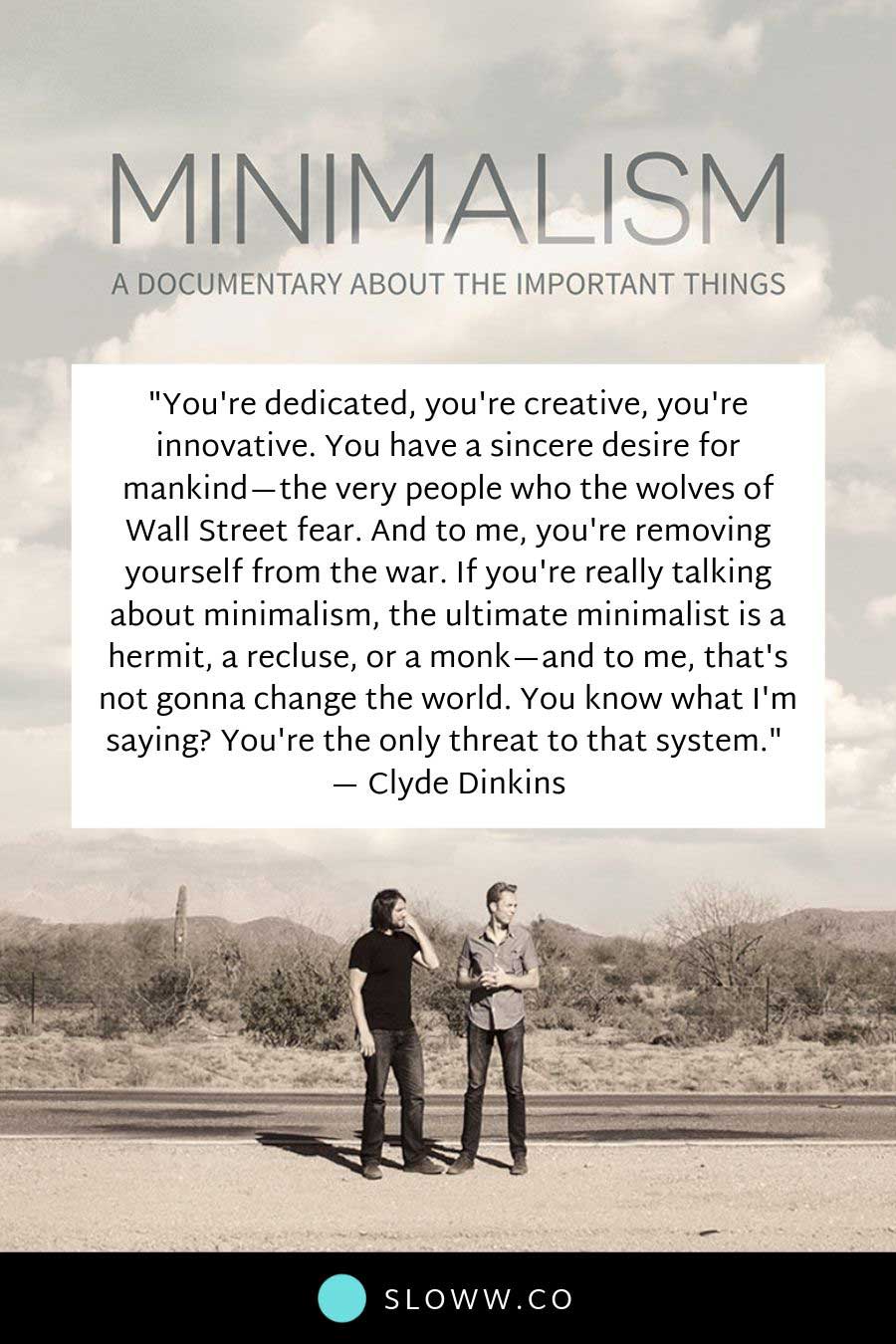 3 Ways to Break Down this Quote from the Minimalism Documentary

In order to really discuss this quote, it’s helpful to break it down into three parts:

Let’s start with the easiest part of the three. While Clyde is right that “the ultimate minimalist is a hermit, a recluse, or a monk,” he’s only considering one very extreme end where a person removes themselves from society to be an ascetic or luddite living in a cave alone somewhere.

That’s not the goal of Joshua, Ryan, or virtually any other minimalist today. Here’s minimalism in their words:

The first big question: Did Joshua and Ryan—by quitting their careers to live and preach minimalism—remove themselves from “the war” as Clyde described it?

Would quitting my marketing job be removing myself from “the war”?

Is there even a war? If so, is this the war of our generation? The war to take back control of our selves and our own lives?

These were all the questions spinning around in my mind when I first watched the film. It’s probably a good thing I’ve had a few years to reflect on the answers. Here’s what I believe now.

Joshua and Ryan may be minimalists, but as much as (or more than) that, they are entrepreneurs. Their website currently says they’ve helped over “20 million people live meaningful lives with less.” If there is a war, they’ve obviously had a much bigger impact on it doing what they’re doing now instead of their previous corporate jobs.

3. On Changing the World:

Clyde seems to be most concerned with what will “change the world.” And, he believes the “dedicated,” “creative,” and “innovative” with a “sincere desire for mankind” are the best people for the job of changing the world.

This is probably the area where having a few years to reflect has helped shape my perspective the most.

A Quick Preview of the Minimalism Documentary

If you haven’t watched the film yet, here’s the official trailer:

In typical minimalist fashion, here’s what The Minimalists themselves say about the film:

The documentary is a good intro to minimalism if you are new to the concept.

What are your thoughts on this one challenging quote? Please let me know in the comments.