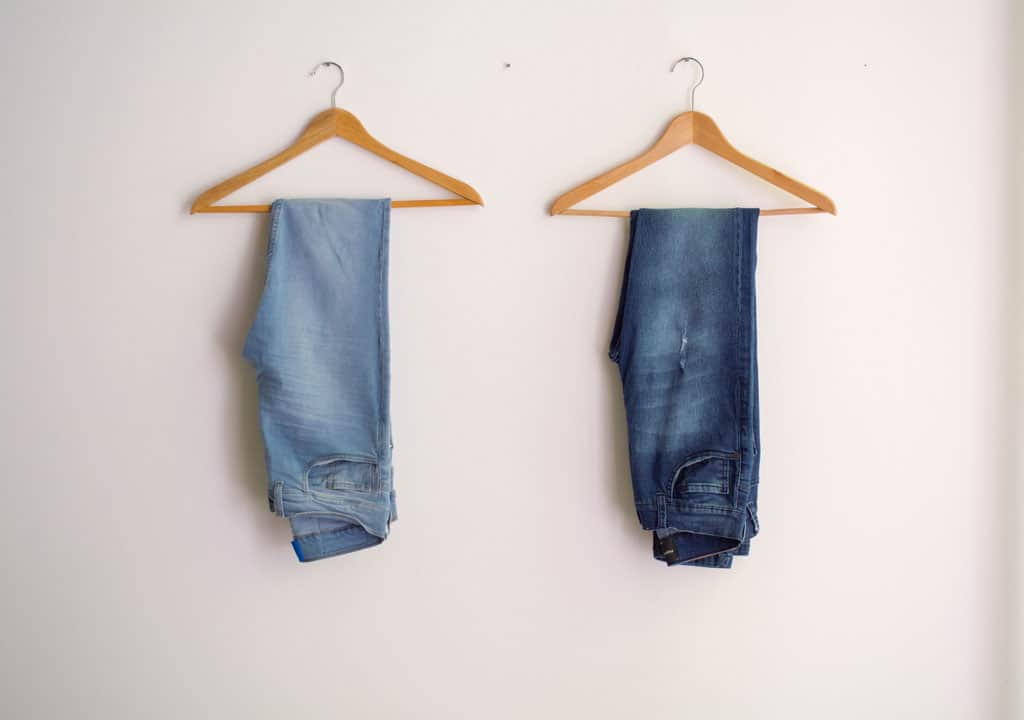 I wasn’t always a jeans minimalist or even into clothing minimalism. Up until a couple months ago, I had spent the prior four years working in marketing for one of the largest denim brands in the world.

Before my first day on the job, I remember rushing out to buy a few pairs of jeans. Soon after I started, I was told I could basically get any jeans I wanted, whenever I wanted…for free.

I never took advantage of free jeans as much as I could have, but I definitely received my fair share. My closet had some jeans on hangers, some folded in stacks, and some on the ground.

But, after a couple years at the company, I started to realize a few things.

3 Ways I Became a Jeans Minimalist

1) I was playing favorites with just a few pairs of jeans. I would wear the same few pairs over and over and over again. This isn’t uncommon. Turns out most people don’t wear most of their clothes. As Joshua Becker mentions in his Simplify eBook, “A typical person wears 20% of their clothes 80% of the time.” By playing favorites, I was also avoiding decision fatigue. I saved time and energy by not needing to think about what to wear each day.

2) Fashion (including denim) is a dirty business on this planet. Fashion relies on newness and trends. That’s how they get you to buy new stuff each season. Minimalism relies on timelessness. That’s how you avoid buying new stuff each season. If there’s any saving grace for denim, it’s that there’s maybe nothing more timeless than denim and a single pair of jeans can last years. And, I’m not only referring to the high-end selvedge stuff.

3) I had an existential crisis, started downshifting, and began to adopt voluntary simplicity and slow living. I started to live much more intentionally and identify wants vs. needs. I didn’t need a bunch of jeans — even if they were free. This simply solidified the minimalism process I had already started. So, I started wearing just one pair of jeans and haven’t looked back.

How you can get into Denim Minimalism

Aim to wear 100% of your wardrobe. Skip the trends and just buy a few pairs of timeless jeans. Once you find a quality pair you like, stick with them. You’ll save a bunch of time and money (and frustration by not denim shopping).

My one pair of jeans are 98% cotton. They’ve held their shape pretty well, and I don’t need to wash them that often. Levi’s CEO urged people to stop washing their jeans to cut down on water usage. Or, maybe you’ve heard of the myth of freezing your jeans to kill bacteria instead of washing them.

I understand one pair of jeans is a little extreme. The perfect amount is probably more like 2-3 pairs (this doesn’t include pairs for physical professions where jeans take a daily beating).

I think we can all agree that finding the perfect pair of jeans is tough — some may even say impossible. For women, denim is the hardest thing to shop for second only to swim suits.

But, some people are able to successfully do it. Take Max Wong for example — she’s bought and sold over 11,000 pairs of jeans but only personally owns 3 pairs! A dressy pair, a play pair, and a grubby pair. She cycles through each of these pairs: the dressy pair becomes the play pair the following year, the play pair becomes the grubby pair, etc. Each year she buys a new dressy pair to keep the cycle going. All three pairs are the same style because she’s found her favorite.

I’m Looking for a New “Only One” Pair of Jeans

The time for this pair is up! I finally developed a hole in the crotch. After patching the hole, I’ve now worn a hole through the patch.

This pair is discontinued, so I couldn’t order it again even if I wanted. It’s also from the brand where I used to work, so I’d like to expand my options now that I no longer work there.

Have any suggestions for slow fashion, long-lasting, quality jeans? I’d love to hear them in the comments.