You know the need for digital minimalism is real when things like the NoPhone, a plastic rectangle resembling a smartphone, now exist. So real, in fact, that they raised $18,000 on Kickstarter, have sold over 12,000 units, and even appeared on Shark Tank. They’ve even branched into new product lines like the NoPhone Air — plastic packaging with nothing but air inside. It has 5 stars on Amazon. “The product is perfect for people looking to downgrade to nothing,” claim the founders. “Now everyone can put down their real phones, pick up the NoPhone Air and enjoy real life.”

In the same spirit, for April Fool’s Day, The Minimalists launched the Nothing app — a plain white screen. The site says, “From the creators of something, comes nothing. Disrupt Humanity.”

Not even world-renowned industrial designer, Dieter Rams, is safe. His original ten principles for good design have been satirically updated for 2017:

On the surface, it’s all a comedic social statement. But, the underlying message is very real. So, what’s going on?

Digital Usage by the Numbers

I’ll keep this part as brief as possible. According to the latest research from comScore’s 2017 U.S. Cross-Platform Future in Focus study:

If those stats aren’t shocking enough:

This high usage is leading to real health issues:

How is this addiction happening? In November 2016, The Atlantic did a nice job of summing it up in a post called The Binge Breaker:

Digital minimalism doesn’t start to pop up in Google Trends until late 2010, so it’s a fairly new phenomenon.

A simple Google search for “digital minimalism” brings back top results including:

These days, there’s quite a bit online about tips for digital minimalism. Joshua Becker at Becoming Minimalist offers some great starter tips in his post “25 Areas of Digital Clutter to Minimize.” Many lists repeat similar tips, including things like:

This is where it gets tough. I truly believe digital clutter is more dangerous than physical clutter — at least in terms of what it can do to your time. Like most things in life, digital minimalism simply requires balance. If only it were simple. You must reject the FOMO (fear of missing out) and focus on intentional consumption. Here are some ideas to get started:

And, last but most importantly, the #1 digital minimalism pro tip is to constantly remind yourself you are a person, not a product. (Click to Tweet)

You are a Person, Not a Product

You are the product when you are using the Internet. You are data that is then sold to advertisers — that they then use to sell you even more stuff you don’t really need. Don’t fall victim to lifestyle inflation. Next time (and every time) you open Facebook from here on out, just remember you are doing exactly what they want. And, the longer you stay the better. More user sessions, more minutes per day, more data, more ad revenue. You are the product.

This “game” has already even been covered by satire site, The Onion: “Exciting New App Allows Users To Be Pawns In 26-Year-Old CEO’s Little Game.”

Luckily for all of us, there are some good souls already fighting back:

Just remember, everything in life is about balance. You don’t have to live for 27 years alone in the woods without sending a single email or having a single conversation with another human being (although, we should all remember the story of the tourist and the fisherman).

Most people need to live through the overwhelm of digital overload before they see the light of digital minimalism. As I learned in the book Chasing Slow, “It is named the ‘web’ for good reason” (David Foster Wallace).

If you’re reading this and are able to catch it early, you’re ahead of many (including myself). If you have any tips and tricks you personally use, please share them in the comments. Good luck, and see you in the real world! 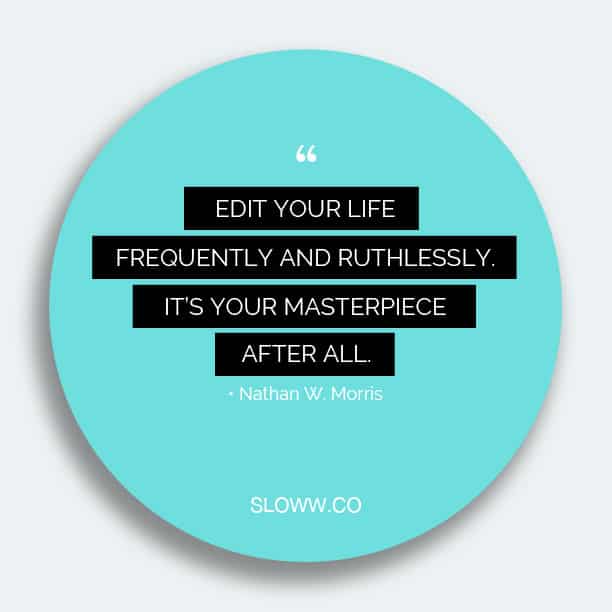