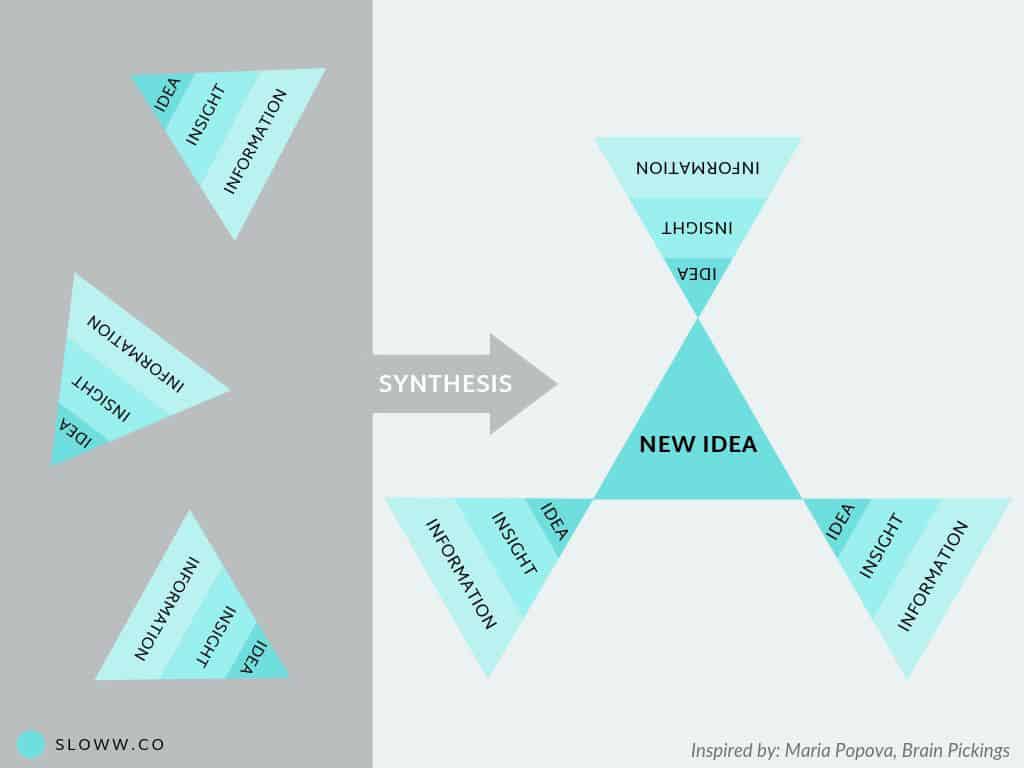 “One form of originality is creation. Another form is synthesis. People often focus so much on creating new ideas that they overlook the value of synthesizing ideas from different sources. Innovation usually mean connecting previously unconnected concepts.” — James Clear, author of Atomic Habits

In the previous post, we learned about combinatorial creativity—one of my top-three learnings from Maria Popova of Brain Pickings.

Popova suggests it’s the power of the synthesizing mind (emphasis added in bold):

Synthesizers: Why the Future Belongs to the Idea Connectors

Here are the best definitions and descriptions I came across for synthesis and synthesizing:

Synthesizing is a never-ending process. New information is constantly combined with existing knowledge—resulting in the creation of new insights and new ideas.

It can often be triggered by intellectual need:

What can you expect from an intellectual synthesizer?

The synthesizing process has been happening since the beginning of humanity—in each individual human as well as humanity as a whole—and there’s a lot we should learn from it. 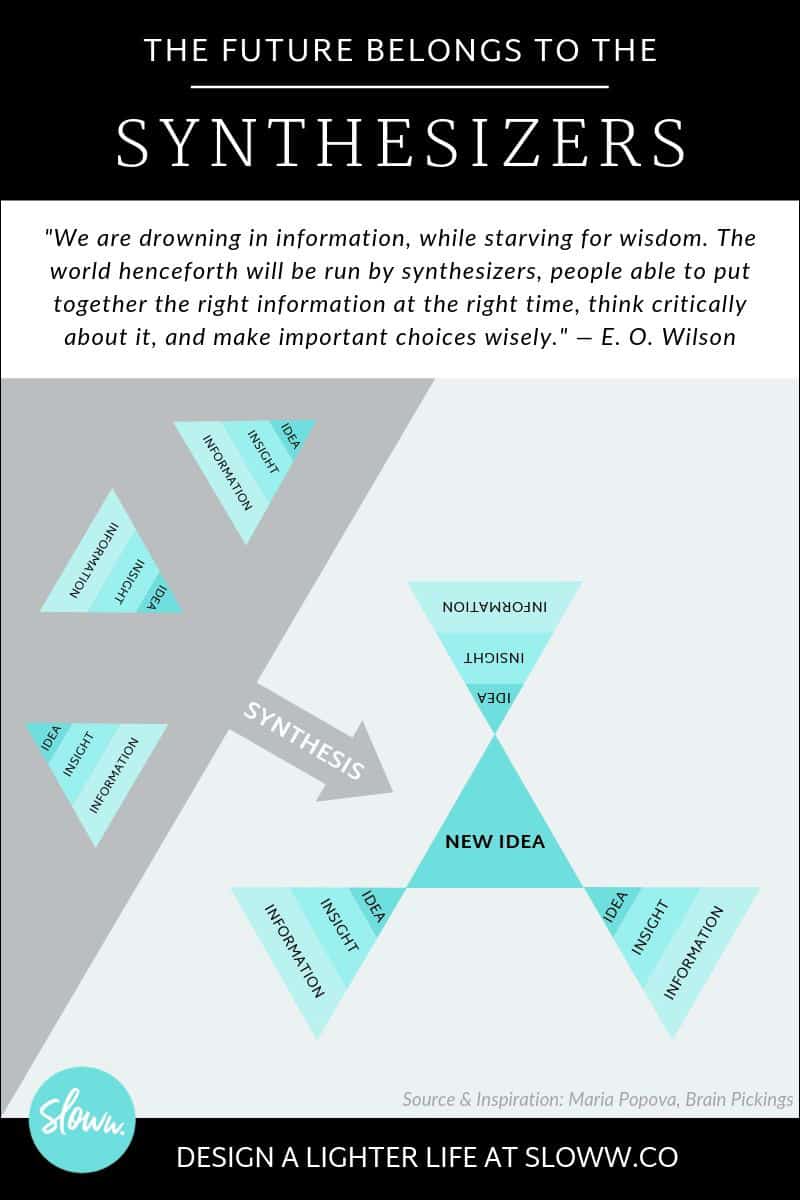 Maria Popova poses a key question for our modern era:

“When did we stop valuing the enormous amount of effort and time and thought that goes into culling and connecting ideas that shape humanity’s creative and intellectual direction?” — Maria Popova

Popova isn’t alone in celebrating the power of the synthesizing mind. Many of the greatest intellectuals and thinkers of the past and present believe in learning from humanity’s collective history.

Some estimate that 108 billion humans have lived on Earth. There are 7.7 billion alive today. That means:

There’s so much we can (and should) learn from those who came before us:

Here are some familiar modern names who appreciate learning from humanity’s history:

Just look at it as “borrowing”:

It’s critical because we each only have an indefinite yet finite amount of time here:

The power is in sharing: 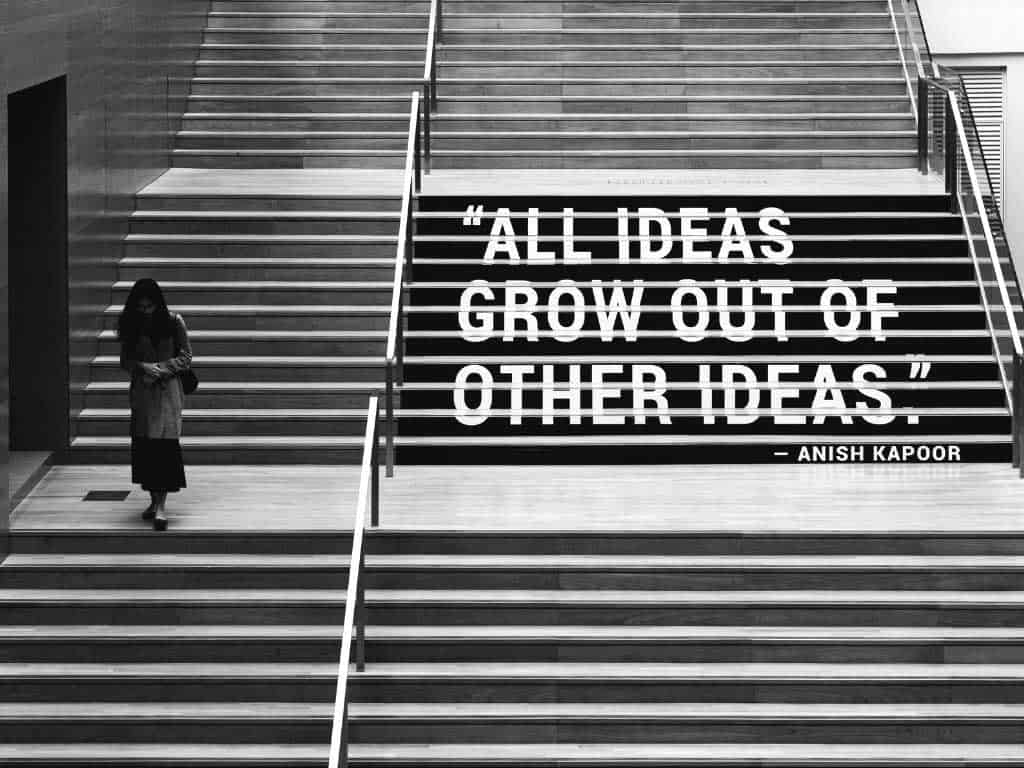 “We are drowning in information, while starving for wisdom. The world henceforth will be run by synthesizers, people able to put together the right information at the right time, think critically about it, and make important choices wisely.” — E. O. Wilson, biologist, theorist, naturalist and author

At first glance, you may assume these next quotes were written today. They are actually from 50+ years ago—possibly more relevant today than ever before.

This sentiment is shared by others:

We should all be primarily interested in timeless knowledge and wisdom that can be used to navigate the modern world:

By being a student of life, you can harness the power of a synthesizing mind and help usher in humanity’s future.

Author Matt Ridley has one of the best TED Talks I’ve seen about the power of synthesis and combinatorial creativity throughout human history. He believes:

Here’s to the synthesizers!