Civilization owes Will and Ariel Durant a debt of gratitude for dedicating their lives to the study and understanding of history. It could be said that The Lessons of History (Amazon) is the definitive summary of their 50+ years of expertise.

Full book summary: 35 Human Learnings from “The Lessons of History” by Will & Ariel Durant (Book Summary)

As mentioned in the previous post, I also found a transcript of two hours of interviews with the Durants that Farnam Street posted. I’ve incorporated highlights from the interview content into the book summary to give you the richest look possible into the Durant’s historical expertise. Enjoy! 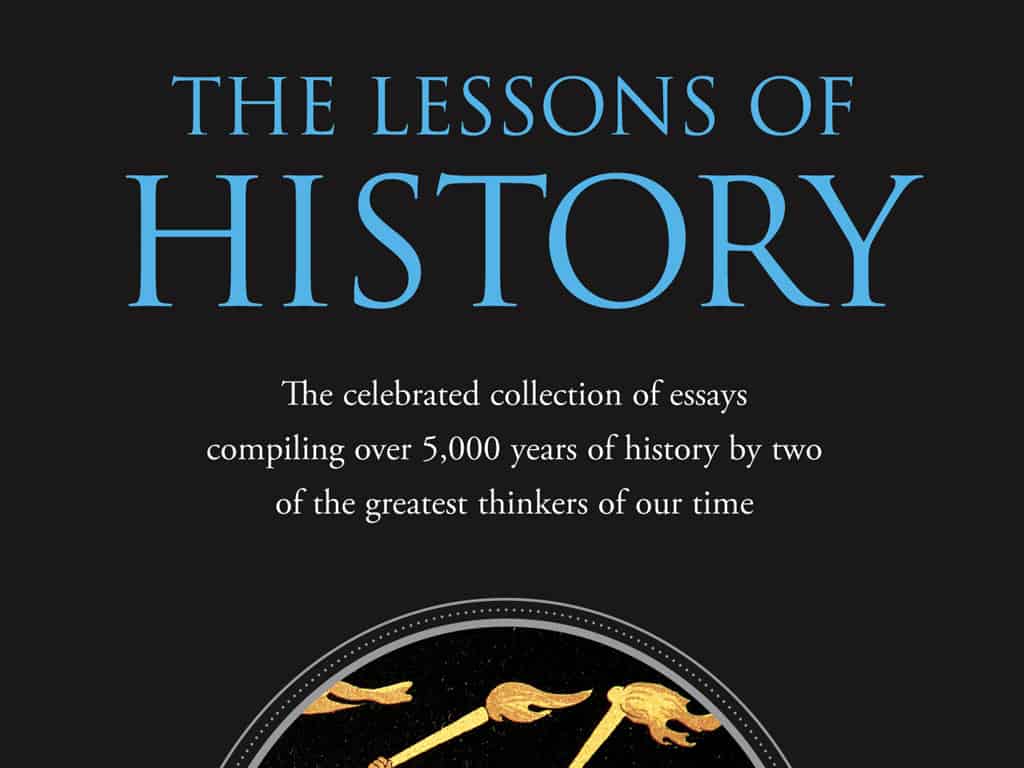 1. What is the meaning of history?

“The meaning of history is it is man laid bare. You see, there are two ways of arriving at a large perspective, which would be a definition of philosophy, a large perspective. One is by studying the external world through science in all its aspects…The other is to examine how man has behaved for the last six or ten thousand years. Consequently, history becomes the best guide we have to what man is, and we have to presume that one of the lessons of history is it continues to behave basically in each generation as it behaved in the generations before. Its instincts are the same. The basic situations that he faces are the same. Naturally, he makes similar responses…the present is the past rolled up for action. The past is the present unrolled for understanding.”

“We have defined civilization as ‘social order promoting cultural creation.’ It is political order secured through custom, morals, and law, and economic order secured through a continuity of production and exchange; it is cultural creation through freedom and facilities for the origination, expression, testing, and fruition of ideas, letters, manners, and arts. It is an intricate and precarious web of human relationships, laboriously built and readily destroyed.“

3. Has human nature changed throughout history?

“By and large, human nature does not change in the historic period. It may have changed in the biological career of man, let us say from the old stone age 50,000 years before Christ, though again it’s very hard to tell because the only knowledge that we have of the old stone age is bones. We can hardly tell what sort of nature they had, so while I might admit that human nature changes, I should say it changes with geological leisureliness and that you can assume without going far wrong that it hasn’t changed in the last 2,000 years.“

4. Does history repeat itself?

“History repeats itself, but only in outline and in the large. We may reasonably expect that in the future, as in the past, some new states will rise, some old states will subside; that new civilizations will begin with pasture and agriculture, expand into commerce and industry, and luxuriate with finance; that thought…will pass, by and large, from supernatural to legendary to naturalistic explanations; that new theories, inventions, discoveries, and errors will agitate the intellectual currents; that new generations will rebel against the old and pass from rebellion to conformity and reaction; that experiments in morals will loosen tradition and frighten its beneficiaries; and that the excitement of innovation will be forgotten in the unconcern of time.”

“If progress is real despite our whining, it is not because we are born any healthier, better, or wiser than infants were in the past, but because we are born to a richer heritage, born on a higher level of that pedestal which the accumulation of knowledge and art raises as the ground and support of our being. The heritage rises, and man rises in proportion as he receives it. History is, above all else, the creation and recording of that heritage; progress is its increasing abundance, preservation, transmission, and use…If a man is fortunate he will, before he dies, gather up as much as he can of his civilized heritage and transmit it to his children. And to his final breath he will be grateful for this inexhaustible legacy, knowing that it is our nourishing mother and our lasting life.”

Premium Companion Post: 🔒 How to Learn from Historical Patterns with “The Lessons of History” by Will & Ariel Durant (+ 2 Infographics)

Full Book Summary: 35 Human Learnings from “The Lessons of History” by Will & Ariel Durant

You can see all book summaries here.