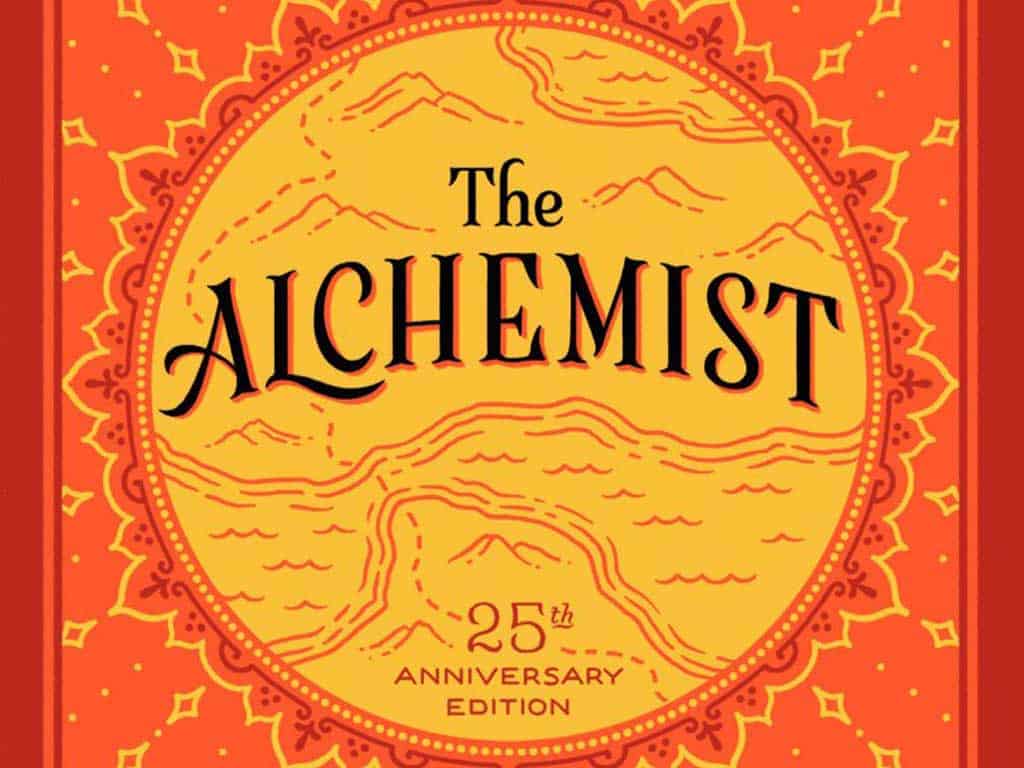 Looking for the full book summary? You can find it here: 15 Legendary Themes & 75 Quotes from “The Alchemist” by Paulo Coelho (Book Summary)

“A certain shopkeeper sent his son to learn about the secret of happiness from the wisest man in the world. The lad wandered through the desert for forty days, and finally came upon a beautiful castle, high atop a mountain. It was there that the wise man lived.

“Rather than finding a saintly man, though, our hero, on entering the main room of the castle, saw a hive of activity: tradesmen came and went, people were conversing in the corners, a small orchestra was playing soft music, and there was a table covered with platters of the most delicious food in that part of the world. The wise man conversed with everyone, and the boy had to wait for two hours before it was his turn to be given the man’s attention.

“The wise man listened attentively to the boy’s explanation of why he had come, but told him that he didn’t have time just then to explain the secret of happiness. He suggested that the boy look around the palace and return in two hours.

“‘Meanwhile, I want to ask you to do something,’ said the wise man, handing the boy a teaspoon that held two drops of oil. ‘As you wander around, carry this spoon with you without allowing the oil to spill.’

“The boy began climbing and descending the many stairways of the palace, keeping his eyes fixed on the spoon. After two hours, he returned to the room where the wise man was.

“‘Well,’ asked the wise man, ‘did you see the Persian tapestries that are hanging in my dining hall? Did you see the garden that it took the master gardener ten years to create? Did you notice the beautiful parchments in my library?’

“The boy was embarrassed, and confessed that he had observed nothing. His only concern had been not to spill the oil that the wise man had entrusted to him.

“‘Then go back and observe the marvels of my world,’ said the wise man. ‘You cannot trust a man if you don’t know his house.’

“Relieved, the boy picked up the spoon and returned to his exploration of the palace, this time observing all of the works of art on the ceilings and the walls. He saw the gardens, the mountains all around him, the beauty of the flowers, and the taste with which everything had been selected. Upon returning to the wise man, he related in detail everything he had seen.

“‘But where are the drops of oil I entrusted to you?’ asked the wise man.

“Looking down at the spoon he held, the boy saw that the oil was gone.

“‘Well, there is only one piece of advice I can give you,’ said the wisest of wise men. ‘The secret of happiness is to see all the marvels of the world, and never to forget the drops of oil on the spoon.’” 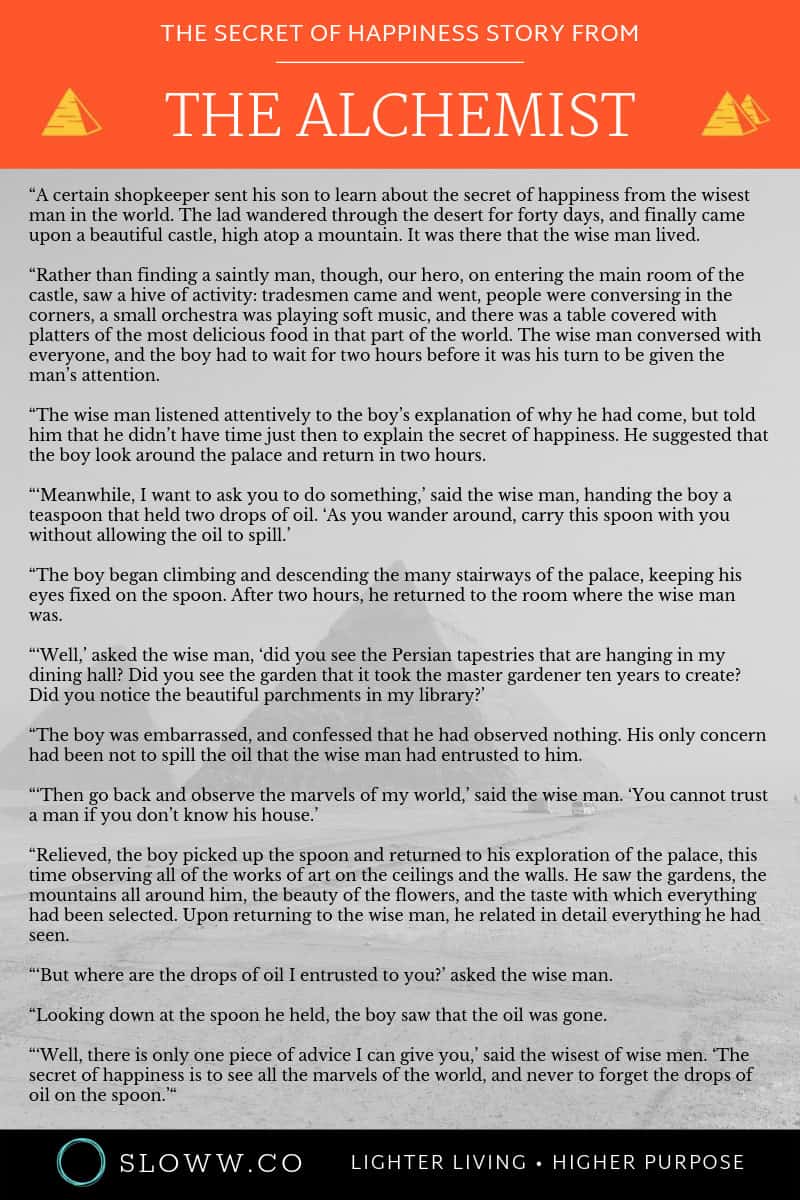 Short stories are always subjective and open to interpretation. Here are my personal takeaways:

1. The boy wandered through the desert for 40 days to find the wise man when the secret of happiness was within him the whole time. This is true of many things in life. We often search outside ourselves for what has been inside all along.

2. Instead of being a hermit or saintly man, the wise man lived among a “hive of activity” and was conversing with everyone. Perhaps this shows that relationships are a key aspect to happiness (Note: the longest-running study on happiness from Harvard shows that relationships are #1 for happiness). Another way to interpret this is that all of these people wanted the wise man’s wisdom—again showing that the vast majority of people are on the same external journey without realizing the truth that is within them.

4. The boy is taught two extremes: 1) When the boy is too focused on the oil (himself), he misses the palace (the world). Focused only on yourself, you miss the natural and man-made marvels of the world. There’s much to be gained by getting outside of your bubble, setting and resetting perspective, and experiencing the vast variety of cultures in the world. Get to know the world. 2) When the boy is too focused on the palace (the world), he misses the oil (himself). Focused only the external, you lose yourself. You are entrusted with certain gifts, talents, and natural abilities. While two drops of oil may seem insignificant in the grand scheme of the world, they are your two drops of oil.

5. The secret of happiness is that life is a balancing act between the external and internal worlds. “The secret of happiness is to see all the marvels of the world, and never to forget the drops of oil on the spoon.” After the story is told in the book, it is followed with, “A shepherd may like to travel, but he should never forget about his sheep.” There’s much to be gained by immersing yourself in the awe-inspiring natural world. But, don’t forget you’ve personally been entrusted with something as well. This is your life responsibility, your purpose, your reason for being. As much as you get from the world, remember that you also have something to give the world.